The Neighborhood Playhouse School of the Theatre is a full-time professional conservatory for actors in New York City. First operational from 1915 to 1927, the school re-opened in 1928 and has been active ever since. It is the birthplace of the Meisner technique of acting, named for American actor and acting teacher Sanford Meisner. 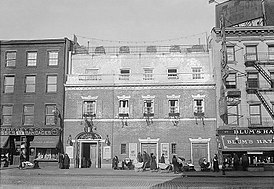 The Grand Street building in 1916

In 1939, when actor Gregory Peck enrolled, there were approximately 90 students at the school.[1] Playwright Horton Foote met actor Robert Duvall at Neighborhood Playhouse when Duvall starred in a 1957 production of Foote's play, The Midnight Caller. Foote recommended Duvall to play the part of Boo Radley in the 1962 film, To Kill a Mockingbird.[3]

The New York City Council honored the 90th anniversary of Neighborhood Playhouse with a proclamation.[2]

The school offers a two-year certificate program, with admission to the second year dependent upon unanimous approval of the faculty.[1] There is also a six-week summer intensive program.

The Neighborhood Playhouse also offers Playhouse Juniors, a Saturday training program for children in grades 1–12. Children attend a fixed curriculum of singing, acting, and dancing classes in a non-competitive environment.