National FFA Organization is an American 501(c)(3) youth organization, specifically a career and technical student organization, based on middle and high school classes that promote and support agricultural education. It was founded in 1925 at Virginia Polytechnic Institute, by agriculture teachers Henry C. Groseclose,[11] Walter Newman, Edmund Magill, and Harry Sanders as Future Farmers of Virginia. In 1928, it became a nationwide organization known as Future Farmers of America. In 1988 the name was changed to the National FFA Organization, now commonly referred to as FFA, to recognize that the organization is for students with diverse interests in the food, fiber, and natural resource industries, encompassing science, business, and technology in addition to production agriculture.[12] Today FFA is among the largest youth organizations in the United States, with 735,038 members in 8,817 chapters[13] throughout all 50 states, Puerto Rico, and the Virgin Islands. FFA is the largest of the career and technical student organizations in U.S. schools.

The organization holds a congressional charter under Title 36 of the United States Code.[14]

The National FFA Organization is a youth leadership organization that makes a positive difference in the lives of young people by developing their potential for premier leadership, personal growth, and career success through agriculture education. The FFA Motto is Learning to Do, Doing to Learn, Earning to Live, Living to Serve.

FFA functions within the three-circle model of agricultural education as a student leadership organization that complements a student's classroom/laboratory instruction and supervised agricultural experience program.[15] FFA members can compete in Career Development Events (CDE) that cover job skills in everything from communications to mechanics. Some events allow students to compete as individuals, while others allow them to compete in teams.[16] These competitions can happen at a local or district level, state level, and on the national level.

Students are supervised by agricultural education teachers that have to cooperate with parents, employers, and other adults who assist individuals in the development and achievement of educational and career goals.

The official colors of FFA are national blue and corn gold.[17]

To be an active member in the National FFA Organization, a member must have a Supervised Agricultural Experience (SAE) project.[18] The projects involve hands-on application of concepts and principles learned in the agricultural education classroom, with guidelines for the SAE projects governed by the state FFA delegation. SAE programs are grouped into four areas:

Secretary of State Mike Pompeo with Iowa FFA students in 2019 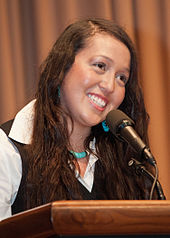 Odessa Oldham, of Casper College in Wyoming, explained her role in the National FFA Organization to the United States Department of Agriculture, as part of its Native American Indian Heritage Month celebration in Washington D.C., in November 2011.

The most recognizable symbol of the organization is the blue corduroy jacket that is worn by FFA members. The back of the jacket features a large FFA emblem underneath the name of the member's state. The name of the local FFA chapter, district, region or area is embroidered below the emblem. The front of the FFA jacket features a smaller FFA emblem on the left chest and the FFA member's name and sometimes, if applicable, office and year on the right chest. Members may also wear award pins or officer pins under their names. FFA members are required to wear the jacket as part of the official dress while participating in all official organization activities.[19]

The color of the jacket's corduroy has ranged from shades of blue to shades of purple through the years. In 2004, the National FFA Organization worked with a supplier in North Carolina to set a new standard for the blue corduroy by using samples from archived FFA jackets. The jacket's color standardization was accompanied by a restoration of the embroidered FFA emblems and fit corrections led by Clemson University's Apparel Research Center. The improved FFA jacket, produced in both Van Wert, Ohio and South Vietnam, was first made available in August 2005. Currently, all lettering, embroidery and finishing of FFA jackets is completed by Universal Lettering Company in Van Wert, Ohio.[21]

FFA members are required to wear official FFA dress while participating in official organization activities. The National FFA Organization recently[when?] updated its bylaws, stating that members may wear any item they are comfortable in, including those which were previously reserved for only one gender. Religious garb, such as head-ware, is also allowed.

Official dress consists of black slacks or a black skirt, a white button up shirt with collar, an official FFA blue scarf or tie, black dress shoes with closed heel and toe, black socks or nylon hosiery, and an official FFA jacket zipped to the top. [19]

FFA members earn metal pins that signify achievement within the organization. These pins can be placed on the front of the FFA jacket;[19] however, official guidelines state that no more than three pins may be worn at one time. The pins are to be placed beneath the FFA member's have their name on the right chest and can recognize the highest degree, highest office, and/or highest award in that order from left to right. Two exceptions exist within pin placement guidelines. When an FFA member earns a State FFA Degree or American FFA Degree, the award keys should be worn above the name on the right chest or attached to the FFA jacket with a standard key chain, and no other pins should accompany these.[19]

Former FFA emblem in use until February 2015.

FFA has many traditions and trademarks identifying it as an agricultural education organization:[22]

The FFA Motto: Learning to Do, Doing to Learn, Earning to Live, Living to Serve.

The FFA Mission: The National FFA Organization is dedicated to making a positive difference in the lives of students by developing their potential for premier leadership, personal growth, and career success through agricultural education.[22]

The FFA Emblem: Cross section of the ear of corn: represents unity. Wherever you live in the United States, corn is grown everywhere. Rising Sun: signifies progress. It represents that tomorrow will always bring a new day. Plow: signifies labor and tillage of the soil. It also shows the historic foundation of our country's strength. Eagle: symbolizes freedom and our ability to explore the new agriculture world. Owl: represents knowledge. Long recognized for wisdom and knowledge. Agriculture Education and FFA: symbolizes the combination of learning and leadership.

The FFA Creed: The creed was written by Erwin Milton "E.M." Tiffany of Lyndon, Kansas[24] and adopted at the 3rd National FFA Convention.[24] It was revised at the 38th and 63rd National FFA Conventions by the assembled delegate body. It is recited by new members to the organization to reflect their growing belief in agriculture and agricultural education. The FFA Creed also must be memorized and recited to earn the Greenhand Degree.

I believe in the future of agriculture, with a faith born not of words but of deeds – achievements won by the present and past generations of agriculturists; in the promise of better days through better ways, even as the better things we now enjoy have come to us from the struggles of former years.

I believe that to live and work on a good farm or to be engaged in other agricultural pursuits, is pleasant as well as challenging; for I know the joys and discomforts of agricultural life and hold an inborn fondness for those associations which, even in hours of discouragement I cannot deny.

I believe in leadership from ourselves and respect from others. I believe in my own ability to work efficiently and think clearly, with such knowledge and skill as I can secure, and in the ability of progressive agriculturists to serve our own and the public interest in producing and marketing the product of our toil.

I believe in less dependence on begging and more power in bargaining; in the life abundant and enough honest wealth to help make it so-for others as well as myself; in less need for charity and more of it when needed; in being happy myself and playing square with those whose happiness depends upon me.

I believe that American agriculture can and will hold true to the best traditions of our national life and that I can exert an influence in my home and community which will stand solid for my part in that inspiring task.

FFA is represented at several different levels across the nation; FFA administration may change from state to state. The basic levels are the national level, serving all of the United States of America, Puerto Rico and the U.S. Virgin Islands; the state level, serving an individual state association; and the chapter level, serving a school or set of schools in an area. By definition, there can be three types of chapters at the secondary level, they are middle for middle school, junior for ninth grade and senior which can be either tenth through twelfth or ninth through twelfth depending on the school. Other levels include districts, sub districts, sections, regions, areas, and federations.

FFA was created to serve high school students and has moved into middle schools where membership may begin as early as age 12, allowing members to become active earlier and stay active longer. Each chapter is chartered as part of the state association and national organization. Collegiate chapters exist as well.

As FFA is a student-led organization intended to serve youth around the nation, it elects officers from its own diverse membership to certain levels of FFA. With these basic constitutional officers a basis of parliamentary procedure is completed during meetings and banquets; each officer during these procedures will stand and recite their office level and what it is stationed by, and why the particular position is stationed as so. Typical officer roles are:

Each officer is an agriculture student and holds responsibilities needed to serve. Officers are elected each year by members at the respective level.

At the national level, the organization has student-held positions of president, secretary, and vice president for each of the four administrative regions (Eastern, Southern, Central, and Western). These officers had to once be officers in their respective state association . 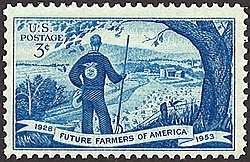 FFA Career and Leadership Development Events (CDE/LDEs) are competitions that members compete in to test their skills learned through agricultural education instruction. They vary at the different levels of FFA, and some are contested only at certain levels or in specific states, districts, areas, or regions.[27]

At the national level, there are 25 Career and Leadership Development Events offered: [27]

Examples of CDE/LDEs offered in some states but not at the national level include:[citation needed]