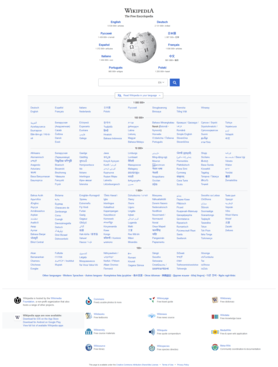 Wikipedia is a free multilingual open-source wiki-based online encyclopedia edited and maintained by a community of volunteer editors, started on 15 January 2001 (21 years ago) (2001-01-15) as an English-language encyclopedia. Other editions were soon created: the German and Catalan editions were created around 16 March,[1] the French edition was created on 23 March,[2] and the Swedish edition was created on 23 May.[3] As of September 2022, Wikipedia articles have been created in 329 editions, with 318 currently active and 11 closed.[4]

The Meta-Wiki language committee manages policies on creating new Wikimedia projects. To be eligible, a language must have a valid ISO 639 code, be "sufficiently unique", and have a "sufficient number of fluent users".[5]

Most viewed editions of Wikipedia over time

Most edited editions of Wikipedia over time

Distribution of the 59,632,216 articles in different language editions (as of 28 September 2022);[6] the majority of the articles in Swedish, Cebuano, and Waray were created by Lsjbot.[7]

Each Wikipedia has a code, which is used as a subdomain below wikipedia.org. Interlanguage links are sorted by that code as a prefix. The codes represent the language codes defined by ISO 639-1 and ISO 639-3, and the decision of which language code to use is usually determined by the IETF language tag policy. Wikipedias also vary by how thinly they slice dialects and variants; for example, the English Wikipedia includes most modern varieties of English (American, British, Indian, South African, etc.), but does not include other related languages such as Scots or Old English/Anglo-Saxon, both of which have separate Wikipedias. The Spanish Wikipedia includes both Peninsular Castilian and Latin American Spanish; Malay Wikipedia includes a large number of Malay languages; and so on.

Additionally, some Wikipedias vary in orthography. Chinese Wikipedia automatically translates from modern Mandarin Chinese into five standard forms: Mainland China and Singapore in simplified Chinese characters, and Taiwan, Hong Kong, and Macau in traditional Chinese characters. Belarusian, however, has a separate Wikipedia for the Taraškievica variant in spelling.

Differences between the ISO mappings and Wikipedia codes include:

The table below lists the language editions of Wikipedia roughly sorted by magnitude of the number of active users (registered users who have made at least one edit in the last thirty days).[6] Script names are listed as their names ISO codes.

Number of Wikipedias by language families and groups[edit]